I grew up in a town of 150 people (1980 Census, now 85 people) in the middle of Missouri. Where I’m from, the stars and bars are everywhere: t-shirts, bandannas, bumper stickers, flags on porches, wallets, belt buckles. I grew up here, but not ever have I worn this flag to display my proud white heritage. I’ll tell you why.

To me, the confederate flag means bad things. It means hate. When I see a confederate flag, I go the opposite direction. Why? Because some of those wearing that flag called me a dyke, a pussy eater, a fucking faggot. Because those were the people in school who called black people niggers and said a lot of other, awful, ignorant and racist things. Because they beat up said black people for being alive. Because people wearing that symbol harassed the one person in our school who happened to be black. And. Well, really, I think that’s enough.

Now, am I basing my judgement of something on only a few people? No. Not a few, but thousands, as this was my experience from ages 0-35. I’m basing this opinion on a lifetime of negative experiences because I have never met one person in my life who wore a confederate flag with the words, “the south will rise again!” (or had one tattooed on their chests, or taped to their truck, or painted on his belt buckle) and wanted to discuss the richness of southern cuisine, dialects, fashion, sense of family or faith, or community. If that person exists, I’m very, very interested in speaking with him or her.

Of course, there’s the rainbow flag, too. Which, to me, used to mean I was accepted and welcome. The first one I saw was above the Peace Nook here in Columbia. The year was 1997 and someone had to tell me what the rainbow meant. I became fascinated and began to look for rainbows everywhere. It meant there were more people out there like me who held some of the same beliefs, who, if they saw me wearing a rainbow, could immediately identify me as one of them. But as I’ve grown older and have experienced people harassing me because of it (yes, some of those people were wearing that other flag), people who were sexually aggressive (so much that I had to run), people who told me I was going to burn in hell, I avoid rainbow flags and necklaces and bumper stickers. Because it just makes me an easier target.

Any flag or symbol helps to identify and make one feel a part of something bigger than themselves, but it also makes one a target. Yes, for all groups.

Having grown up in Missouri, I’ve heard arguments on both sides whether or not my state is southern. If you know me, you know I argue that it is based on food, slang, and political views and affiliations. Based on social conservatism and that fact that coming out meant some of my friends and family treated me with Bible verses, derogatory names, and utter silence.

So what’s the difference between flying these two flags? One stands for something that has passed, for a country that struggled to exist, whose ideas were already antiquated and strove to keep millions enslaved, and one stands for new ideas, for hope to come for a group of oppressed millions. I’ve seen southerners fly a rainbow flag, but never gay southerners (who are very proud to be southern) fly a confederate flag.

Taking down the stars and bars doesn’t immediately change the racism rampant in our country, and it does’t mean that Americans aren’t appreciative of southern culture. Raising a rainbow doesn’t change homophobic opinions or ensure the safety of LGBTQ people.  It also doesn’t mean gays are running the world.

So, gentle reader, until the confederate flag is the symbol of sweet tea and gramma’s fried chicken at a Sunday meal, and no one calling my significant other my “friend,” and without anyone saying “(insert any racist term here),”  then I just can’t get behind it. 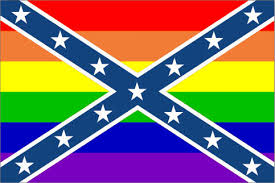